The lights are not long out on the inaugural day-night Test in Adelaide and reviews are of the rave variety. The crowds turned up. Pundits pontificated excitedly – at excessive length – about a pink ball which ultimately behaved itself. And the cricket, despite arriving a little early, was as thrilling as one could reasonably hope for.

But, amid the backslapping and stamped approval, sour notes seeped through.

Nathan Lyon’s ill-judged sweep has now been seen hundreds of times from all angles. The non-dismissal was reviewed for a total of six minutes yet still the wrong decision was made. The on-field umpire gave it not out. That was a mistake, but excusable. Then up stepped third umpire Nigel Llong to provide the source material for his future nightmares.

Admittedly, RTS (Real Time Snicko) audio showed no discernible spike that might suggest a top edge. And the side-on hotspot camera was partly obscured by Lyon’s reach out of frame. But there was more than enough evidence from the front-on view and the nature of the hotspot mark to overturn the decision.

There was further damning evidence, admittedly beyond DRS’ rigid jurisdiction, when Lyon headed for the dressing rooms as he watched his own bluff seemingly exposed on the big screen.

He paused long enough to be recalled while Llong floundered.

“There’s a mark on the bat but it could have come from anywhere,” Llong mused.

The words rankled many and reduced Kiwi commentator Ian Smith to a fuming, sarcastic mess for the remainder of the broadcast.

The absurdity compounded when a panicked Llong asked to check for LBW and failed to notice that the replay showed an entirely different delivery.

It’s a stark reminder that DRS technology is not immune from human error. Indeed, its application and interpretation continues to frustrate on a number of fronts.

Let’s talk LBW for a moment (I know you’ve been dying to). The stumps are a small target as it is. Adding in all LBW criteria – not pitching outside leg stump, hitting batsman in line etc – and the old ‘benefit of doubt to the batsman’ guideline, the target shrinks further still.

If in any doubt, umpires tend to side with the batsman, working on the mistaken assumption that a non-decision has less impact on the game than an erroneous dismissal.

Currently, for LBWs to be overturned from an on-field ‘not out’, more than 50 percent of the ball must be pitching suitably, hitting in line, and hitting the inside half of the stumps (!) as predicted by Eagle Eye ball tracking.

An astounding margin of error is employed. As a result, LBWs are not awarded, only for the bowling side to burn a review because the ball lacked the courtesy to be hitting the middle of middle.

Chances are it was still very much hitting the stumps – thus the wrong (or, at the very least, conservative) decision is not only made, but endorsed by DRS’ interpretation. 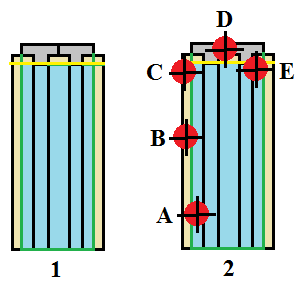 In the diagram above, the blue area is bordered by the centre of the outer stumps and bottom of the bails. This is the region within which THE CENTRE of the ball must be hitting to overturn a not out LBW. Therefore, only balls A and E would be overturned had they been given not out initially.

But this fails to recognise that every ball above is smashing the stumps comprehensively.

The bottom line is that they don’t trust the technology. While it isn’t as straightforward as tennis where ball tracking only has to measure actual, rather than predicted path, the current margin of error – half a ball and half a stump – is literally incredible. If they can’t trust it more than that, they might as well abandon it altogether.

A perfect example occurred during Australia’s run chase on Sunday. Shaun Marsh was scratching around under pressure and a Tim Southee inswinger thumped low into his front pad. The umpire said no and New Zealand, reluctantly, declined to review. Their decision was wise, considering it wouldn’t have been overturned, but ball tracking had it taking all of leg stump. Play on. Marsh survives, steering Australia near enough to victory.

I am both an Australian fan and a batsman. If my bias leans anywhere, it should be towards justifying our lucky breaks. But cricket is losing out. Batsmen are favoured enough without effectively removing a modes of dismissal.

Of course, there was a great deal of cricket to be played between the Lyon  incident (or Marsh’s non-incident) and Australia’s eventual triumph, but on such moments can results hinge.

Umpires, left to their own devices, still get the majority of decisions right. And for that, credit is due. But the DRS was supposed to rid the game of that sense of injustice that infects a team when decisions don’t go their way. Vindicating correct decisions and eliminating howling errors. That was the plan.

Instead of improving accuracy, however, technology has really only reduced tolerance of mistakes. Resentment grows to the point where both sides start to feel robbed.

We’re starting to see farcical scenes of batsmen shaking their heads for perceived harsh treatment when the ball is shown to be clipping the bails (see: Steve Smith) – which is still hitting the stumps, last I checked. Likewise, bowlers rage and posture for the indignity of having to overcome an Umpire’s Call.

There’s no doubt that technology can help the game. But not until administrators trust it and players, in turn, can trust its application.

Now we wait to see if the DRS can be trusted to successfully review itself. Don’t hold your breath.

Sydney-based writer. Avid sports fan. Plagued by a jarring mix of wanderlust and travel anxiety. View all posts by charlielawry